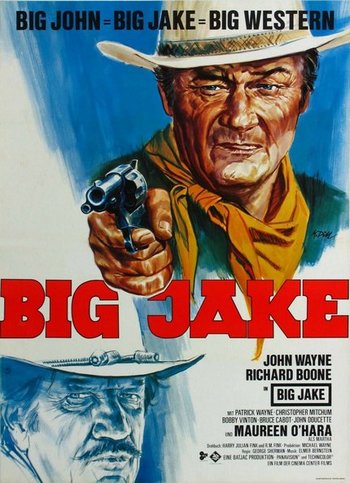 "They wanted gold. He gave them lead instead!"
— From the promotional material
Advertisement:

A 1971 Western movie starring John Wayne, Richard Boone, Maureen O'Hara and Jim Davis. In 1909, a gang of brutal ruffians led by John Fain (Boone) violently kidnaps the grandson of Martha McCandles (O'Hara), who runs a large and lucrative cattle ranching operation. When the thugs demand a ransom, Mrs. McCandles decides it is time to call in her long-lost husband, Jacob McCandles (Wayne)- a rough and unpleasant man, to do a rough and unpleasant job.

Not one of The Duke's most famous Westerns, it is an interesting treat for dedicated fans. it was made relatively late in the careers of most of those involved, Wayne and his colleagues brought their many years of experience in making Westerns to bear on Big Jake, resulting in a competently-made, easygoing, consistently entertaining film. In addition to older, experienced Western actors, the film also featured two of John Wayne's real-life sons, as well as the son of Robert Mitchum. The score was pretty good too.

Set in 1909, rather than the 19th century, like most Westerns, Big Jake deals tangentially with the closing of the American West and the ''end'' of the age of cowboy heroes like those played by John Wayne throughout his career. Automobiles, motorcycles, oil wells, and semi-automatic pistols all make appearances, and Jacob McCandles (as well as his Indian companion, Sam) are both old and grey, worn out by years of hard living.