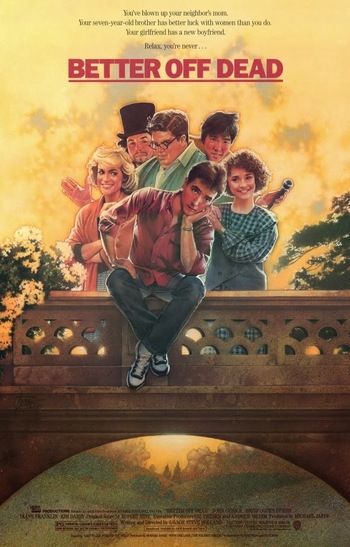 Better Off Dead is a 1985 black comedy film written and directed by Savage Steve Holland and starring John Cusack.

After being dumped by his utterly-unfaithful girlfriend Beth (Amanda Wyss), luckless teenager Lane Meyer (Cusack) makes several futile attempts to kill himself, while wandering in and out of a series of encounters with the residents—or should we say inmates—of his bizarre hometown of Greendale, California. These include Lane's long-suffering father Al (David Ogden Stiers), ditzy mother Jenny (Kim Darby), and super-genius younger brother Badger (Scooter Stevens); his severely-underachieving best friend Charles (Curtis Armstrong); a pair of Korean car-racing enthusiasts, the one who speaks English having learned it from listening to Howard Cosell; and one very determined paper-boy. Lane's life finally begins to turn around when he meets Monique (Diane Franklin), a comely French exchange student who has been sentenced to live with the Meyers' grotesque neighbor Mrs. Smith (Laura Waterbury) and her socially awkward son Ricky (Dan Schneider).

Probably doesn't quite make it to classic status, especially the ending which veers off into painfully straight teen-movie win-the-athletic-competition territory, but mentioning this film or quoting from it is very likely to bring a smile to the face of Tropers of a certain age. It does have a pretty strong cult following due to the fact that aside from that ending, it has a different sense of humor than most '80s teen comedies and seems far less dated than other films of its type.

"Now that's a real shame when folks be throwin' away a perfectly good trope list like that":

"I want my two dollars!"