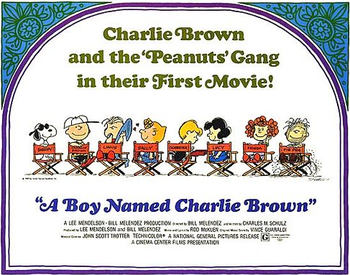 A Boy Named Charlie Brown is a 1969 American animated film directed by Bill Meléndez. The first feature film based on the Peanuts comic strip by Charles M. Schulz, it was produced by Lee Mendelson Films and the CBS network's film division, Cinema Center Films, for National General Corporation. This was also the final animated Peanuts production to feature Peter Robbins as the voice of Charlie Brown. (Robbins had voiced the character for all of the Peanuts television specials up to that point, starting with 1965's A Charlie Brown Christmas.)

Charlie Brown can't seem to catch a break. Whether it's being frequently humiliated by his other peers like Lucy, or causing his baseball team to lose the first Little League game of the season, it seems like nothing can ever go right for him. However, things change for him when Lucy jokingly tells him he should join the school spelling bee. Linus convinces him to join and, through determination, winds up making it from the school-wide spelling bee to the national spelling bee. But can he make it through and win the trophy?

This film is not to be confused with an unsold 1963 TV documentary of the same name about Charles Schulz and the strip, including the soundtrack album with music by Vince Guaraldi that was originally titled Jazz Impressions about A Boy Named Charlie Brown, but shortened to the name of the documentary.

Example of:
Rouge Angles of Satin