"We've got to have,
we plot to have,
for it's so dreary not to have
that certain thing called 'the boyfriend'"... 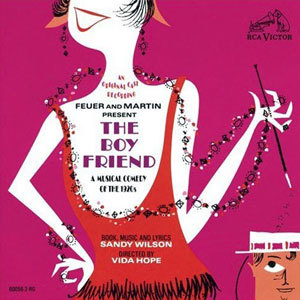 The poster for the 1954 musical 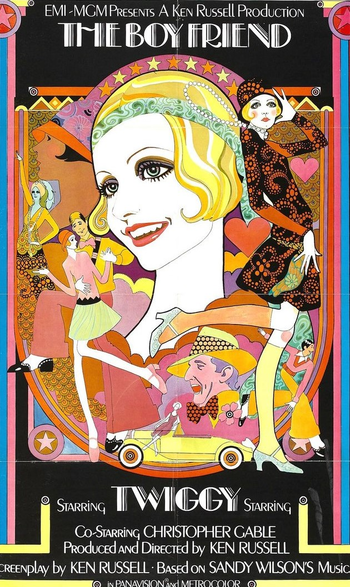 The poster for the 1971 film
Advertisement:

The Boy Friend is a 1954 musical by Sandy Wilson, and is a pastiche of the musicals of The Roaring '20s. Set in the 1920s in Nice, France, it follows the story of a seventeen-year-old British young lady named Polly Browne and her friends at Madame Dubonnet's Finishing School. All of Polly's friends have, or at least claim to have, a boyfriend, but Polly herself does not. Her father practically forbids her to have a boyfriend because she is incredibly rich and he fears that any boy that courts her will be after her wealth. Thus, Polly makes up a boyfriend, feeling as if she may never find true love. That is, until she meets a handsome young British messenger boy named Tony...

The musical also has subplots featuring an American boy named Bobby van Husen attempting to court Maisie, another perfect young lady at the Finishing School; the reunion of Madame Dubonnet and Percival Browne, Polly's father; and the antics of Lord and Lady Brockhurst, a rich British couple vacationing in Nice at the time of the plot, which all happens in one day.

It has a far less well-known sequel called Divorce Me, Darling!, set ten years later and a pastiche of 1930s musicals. Everyone is in Nice again, and happen to meet up. Madame Dubonnet's finishing school no longer exists, and many of the characters have completely different lives than before. The main plot is that Polly and Bobby, after meeting up, are accused of having an affair due to a series of misunderstandings from their respective mates.

It was adapted into a film in 1971, directed by Ken Russell and starring Twiggy as Polly Browne.

The Boy Friend contains examples of:

Tropes examples for The 1971 Movie: