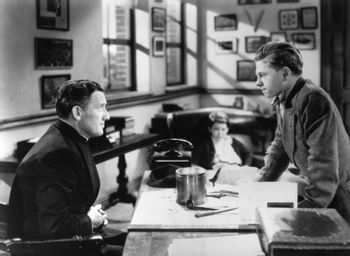 See how tough Mickey Rooney looks?
"There's no such thing in the world as a bad boy."
Advertisement:

" organization for troubled boys. Tracy plays Father Edward Flanagan, who starts the movie running a refuge for hobos, but comes to believe that his time would be better spent mentoring troubled boys before they become hardened toughs. Father Flanagan takes five local street kids into a home. When the five kids grow to be fifty kids Father Flanagan builds an institution that becomes known as "Boys Town". Mickey Rooney plays Whitey Marsh, a particularly troubled kid that Father Flanagan takes a special interest in.