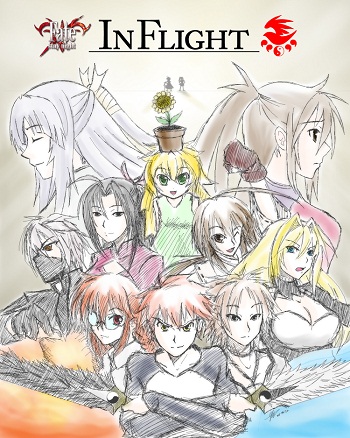 . Yes, the same guy who wrote The Hill of Swords.

The story opens with Shirou en route to Japan after an altercation at the Clock Tower that he'd rather not talk about. His attempts to get through airport security are stymied by a new MBI security technology, some kind of DNA analyzer prototype. It leads — in a rather bizarre and improbable series of events — to Shirou meeting his biological mother, one Takami Sahashi. Shirou's proper birth name turns out to be Minato Sahashi, and of course, given what Takami is involved with and that he picked Shin Tokyo of all places to settle down in, Shirou's attempts to lay low until his business with the Clock Tower dies down are fated to be severely eventful. During a stroll in a park, he finds a traumatized woman covered in bloodstains who says to him:

"I'm broken," she whispered, not even bothering to glance at me, "a failure."

With the initiation of the Sekirei Plan and his sudden affiliation with a group of mysterious alien girls, Shirou is irrevocably embedded in another twisted tournament.

This story is guilty of Harem Antics, Badass Fight Scenes, and Hilarious Escapades. As of Dec 14, 2013, it is also completed.

Like The Hill Of Swords, this fic has a particularly active Fandom, who is in awe of its awesomeness, and Hatedom, which goes to great lengths explaining why it doesn't like the story. It is recommended to recite the MST3K Mantra before reading.

One of the few Fan Fics to spawn multiple instances of Recursive Fanfiction; probably the most (in)famous example being The Emiya Clan.

Now has a Character page under construction.

See Fate/stay night and Sekirei for the tropes of those respective universes.