If You Ever Do Anything to Hurt Her... 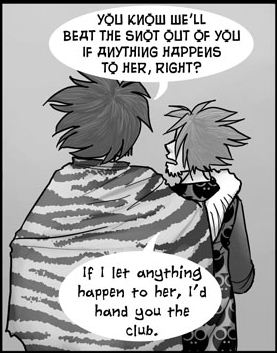 "I've never seen my sister this happy, Ian. If you hurt her, I'll kill you and Make It Look Like an Accident."
— Nick Portokalos, My Big Fat Greek Wedding
Advertisement:

The common trope way to concede defeat in vying for a girl's heart is to tell the winner that, if he ever screws up, he should expect an ass-kicking of epic proportions. Usually uttered by (or sometimes to) The Lancer or The Rival.

This establishes that the loser:

The trope thing for the winner to do is to accept this statement amicably. "I would be disappointed if you didn't." This is not (usually) an insult or a threat, but an agreement between guys who both want the same girl to be happy.

This can also be said by a parent or older brother (or sister) of the girl, who is relinquishing their previous role as "main male protector." But while this is generally a male-character trope, there are plenty of exceptions (sorted by gender in the examples). There are also occasional subversions where the supposed "male protector" simply delivers a warning that the girl will kick the guy's ass if he ever betrays her.

And yes, an asskicking of epic proportions will follow should any betrayal occur.

Compare with a Declaration of Protection, which is the guy promising to the girl that she won't be hurt.

Loki even lampshades it after hearing it three times already.

And he likes Charlie!

Alternative Title(s): If You Ever Hurt Her, If You Ever Do Anything To Hurt Him, Shovel Talk