Literature / Glory in the Thunder 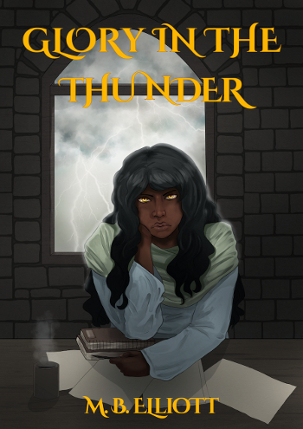 "The gods have come out to dance. Whenever they do, people die. The best one can hope for is that they turn only inwards."
— Ziazan
Advertisement:

Glory in the Thunder is the first book in the planned Aspects of the Divinity series, released on October 20, 2013.

Hayr is a young lad of the Tokhar protectorates, forced to flee home after his brother discovers his true nature. Alone and vulnerable on the road, a suspiciously convenient chance encounter sees him pulled into the company of Mad Oracle Rashk and his coterie of Artificial Humans. The four nations of the Tarim region are embroiled in a flow of events which the gods themselves do not fully understand, with Barsamin of Chald, Ismyrn of Petragon, Katarosi of Antaram and Hayr locked in the center. Meanwhile, Knight in Sour Armor Tsovinar seeks the unsettling truth that lies at the heart of her world.

A Gaslamp Fantasy novel set in a fictional counterpart to The Silk Road, with themes of non-standard theology, tolerance, and deconstructing You Can't Fight Fate. Involves numerous characters and lies somewhere on the Sliding Scale of Idealism Versus Cynicism between Harry Potter and A Song of Ice and Fire.

The author is One of Us and maintains a Tumblr

related to the novel.

Glory in the Tropes: