Fanfic / The Dragon That Will Pierce the Heavens 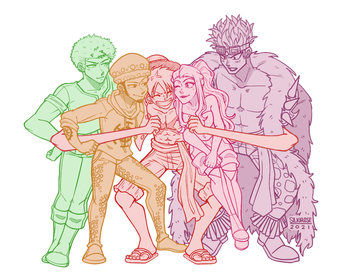 Our protagonist Hikari, with Luffy, Zoro, Law and Kid. *Credit goes to silkirose on Tumblr.*
Advertisement:

When Hikari set out to sea, she never dreamed of the adventures that awaited her. Meeting Monkey D. Luffy sets her down a path that will rewrite the very laws of the stars, and she finds herself enjoying the chaos along the way.

A Fusion Fic crossover of One Piece and Fairy Tail, with a Luffy, Zoro and original character three-way pairing. As of the Heartfilia Arc, this story is also building to add Trafalgar Law and Eustass Kid to make a five-way polyamorous relationship. Written by Dragon Princess 18 and originally published on May 05, 2019 on Archive of Our Own. Was rewritten starting December 07, 2019.

Currently has these arcs:

Also has an AU/Drabble series, Moonbeams and Stardust, found here

and a smut side-story, 'Courtship Of A Dragon', found here

Has a Tumblr Page as well, found here

This story was partially inspired by This Bites! by Xomniac.

"Mama!"
"Because he hasn't kicked your ass yet."