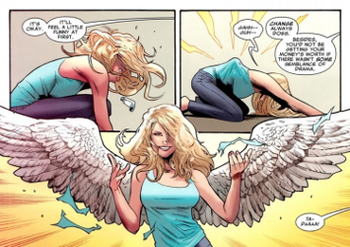 'Cause I'm free as a bird now.
Advertisement:

Since the dawn of time man has wanted to fly. But, well... To be honest it is pretty darn hard. It took a long time to figure out that humans themselves could not fly and it took even longer before man could do it with tools. But what if if could be done easier? What if humans could simply grow wings themselves and fly away?

Growing Wings is a trope centered around a person, animal, or even an object that sprouts wings. The wings either grow over time, or are gained instantly. The wings can appear suddenly, often as a result of a magical spell or MacGuffin.

In case of a person or animal, the character could also go through Metamorphosis. They can wake up one morning to discover tiny wings on their back, which grow over time until they are functional. The initial sprouts can be ridges, feathery tufts, or tiny, articulated wings. The more realistic the story is, the more slow and painful the change will be. If the transformation is graphic and large flight muscles also develop, it can be a case of Transformation Horror.

Note that this trope is for permanent or semi-permanent wings. Wings that appear and disappear go into the category of Power Gives You Wings. For instances where people wish this would happen, see Call of the Wild Blue Yonder.

Spike reaches the final stage of the Molt, where he grows a pair of wings.

Spike reaches the final stage of the Molt, where he grows a pair of wings.