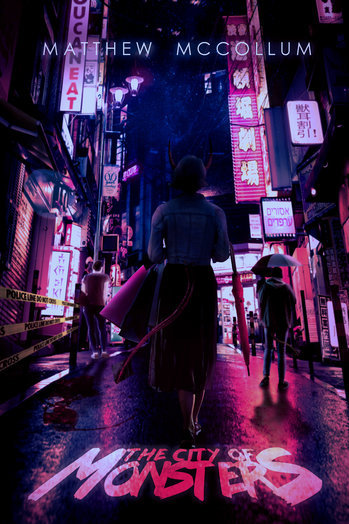 "I'm saving this city with or without you."
— Derek Huntsman
Advertisement:

Domina is a novel (originally a web novel published on wordpress) about the title city. The plot revolves around Adam Anders, a newcomer to the city, and his roommate, Derek Huntsman. The first few chapters are just Worldbuilding, setting up the background of the city. But soon enough, things start going in unexpected directions. Derek discovers he has powers, and several of his close friends do as well. Then it turns out that there are super-powered zombies attacking the city, and a gang lord asks them to save it.

One of the biggest things that makes the city of Domina unique is its use of the toy maker, a Bio-Augmentation device. People can use it to remake themselves however they like, and entire cultures have formed based on vampires, demons, and angels. The city's harsh nature means that most of these cultures spend their time killing each other, but the political balance is being upset by the arrival of the screamers.

The story finished in October of 2017 at 335 chapters. It was later published in book form, with two novels so far:

This web-novel shows examples of: