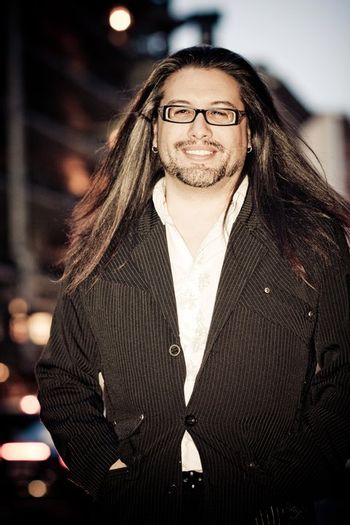 about Karateka), Romero left Softdisk after two years to form id Software in 1991. At id, Romero was involved in the production of Commander Keen, Wolfenstein 3-D, the first two Doom games, and Quake. (Gamer Chick Stevie "killcreek" Case defeated him at Quake and became his girlfriend.)

In 1996, following some long-running disputes with the other members of id Software, he, co-worker Tom Hall, along with Todd Porter and Jerry O'Flaherty, formed Ion Storm. Ion Storm's flagship title would have been Daikatana, an ambitious first-person shooter set for the holiday season of 1997, a seven-month development period that his former partners at iD, notably John Carmack, saw as patently ludicrous.note It's worth mentioning, though, that short development times were nothing that unusual during the dawn of first person shooters - iD themselves, with Romero still on board, developed Wolfenstein 3D in a few months and the first two Doom releases took about half a year each to complete. Quake was iD's first project that had a development time of over a year (at least according to Masters of Doom, the iD biography). When he decided to switch to the Quake II engine in the middle of development for its advanced graphical effects, company morale had eroded by then, with most of the team either quitting outright, or moving to the studio's Austin branch, spearheaded by Warren Spector of Looking Glass fame. John set another deadline, February 15, 1999, but the game still was not finished by then. It wasn't until April 21, 2000 that Daikatana was finally released.

Daikatana came with a notorious tagline that stated, "John Romero's About to Make You His Bitch." Aside from that, the game, for lack of a better word, sucked. On July 17, 2001, Ion Storm's parent company Eidos Interactive closed its Dallas office. Four years later, Eidos closed the Austin branch. To be fair, many reviews said that Daikatana would have been a good game, just not a great game, if it had come out when it was originally supposed to. He has since apologized

for trying to make players his bitch and is resigned to Daikatana's status as the punchline of video game jokes.

John then founded Monkeystone Games with Tom Hall. They developed and published about fifteen games for mobile phones. John joined Midway Games as project lead for Gauntlet: Seven Sorrows, and the Monkeystone team moved to Austin, Texas to work on Midway's Area 51.

He and his wife, Brenda, helped to train game designers at the University of California, Santa Cruz. They later founded a studio, Romero Games, in 2015. The first game was a remaster of Dangerous Dave in the Deserted Pirate's Hideout, followed by Gunman Taco Truck. In 2019, Romero released a megawad called Sigil, which serves as the unofficial fifth episode for the original Doom. In E3 2019, Romero Games revealed Empire of Sin, a mafia strategy game published by Paradox Interactive.

He's gone on record saying his all-time favourite video game is Chrono Trigger and he likes heavy metal music. He is also a very well-known MacHeadnote Somewhat ironically, this means he's unfamiliar with modern developments the shooter genre that made him famous because few have been released on Mac and he refuses to play shooters on consoles. and only got his first Windows computer late in the New Tens. For more information about Romero's history and influence on video game culture, read all about it in David Kushner's Masters Of Doom. If you have any questions you want to ask him about his games (even Daikatana), there's a good chance he'll answer them on his Twitter