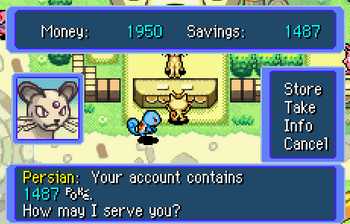 Losing one's Geo is a terrible thing and it's so much more likely if you carry it about on yourself.
My vault is much more secure. In all my time as a banker, I've never lost a single Geo!
Maybe you'd considered opening an account?
— Millibelle the Banker, Hollow Knight
Advertisement:

Several video games have a currency that the player can use and hold. In most games, the complexity of the money system stops here.

Other games are deeper in their simulation of money: some avoid the Wallet of Holding, limiting the amount of money the character can carry on them with a Cap. In some games, the player is able to put their money in an account they can access from one or even several other places in the game. While some games have these accounts solely to store money, in other games interest is applied to these sums, allowing the player to slowly earn more money thanks to their savings. More advanced versions allow the player to invest in more risky products, allowing them to earn much money but also to lose their funds.

It's most typically used as a Anti-Frustration Feature whenever the player experiences a Game Over or Total Party Wipe and is allowed to continue playing without losing game progress. While some or all of the money on hand will be lost in exchange for resuming game progress; anything stored in the bank is safe.

In other games, the player can borrow money to fund purchases. Such loans are to be reimbursed, and the player might suffer consequences for failing to repay them, such as being attacked by goons. One of the consequences might be having to Work Off the Debt.

Other, more fringe banking services might be provided, such as life insurance (delivering money on the death of a character) or financial markets allowing the character to put their money on the stock market and bet on the rise of financial assets.

A large amount of Simulation Games (especially Construction and Management Games and Space Management Games) usually offer the player a form of loan system. These either tend to be individual terms that are slowly paid off over time (or repaid when possible), or an amount that you can borrow in increments for an indefinite period of time until you repay but it will continuously draw interest until it is repaid.

See also An Entrepreneur Is You, Money Sink (the payment of interests might be interpreted as such) and Arbitrarily Large Bank Account.