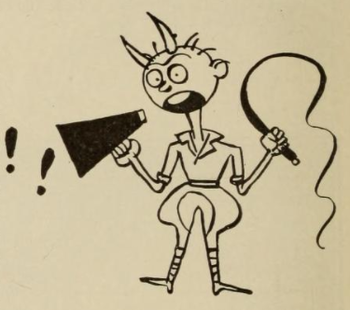 Keep in mind that this illustration from Photoplay magazine dates back to 1921!
"The only place where you can be a dictator and still be loved is on the movie set."
— Federico Fellini
Advertisement:

He laughs and cries. He jokes and rages. He begs, he cajoles, he screams, he threatens suicide. He eats so much of the background that it has to be replaced between takes, and he'll eat your face too if you try to correct him.

He's also not on stage.

The worst nightmare an actor, especially in the world of fiction, can face is a director of this type. He's hammier than BRIAN BLESSED and has an extremely exacting interpretation of his own artistic vision. He believes himself to be lord of the studio and no one dares to correct him, including those higher up the executive ladder (i.e. his bosses). Often times he can act better (or at least more dramatically) than all of his actors put together, and he expects each and every one of his staff to be up to his standards. He will take sole credit for the production and will shamelessly steal other people's brilliant ideas and pass them off as his own.

One wonders why he hasn't been fired yet if they are so temperamental. But sometimes, it's because his methods work. He actually can make his vision real within a given deadline, with an amazing high-quality standard, setting him somewhere near the Bunny-Ears Lawyer and Insufferable Genius category. If this guy has a redeeming feature, that's it. In Real Life, there is a multitude of reasons why people may be difficult to be around, and especially when it comes to a creative endeavor some just don't play well with others. And often it may be that they have a good relationship with the producers or crew but fight with the actors, or any combination thereof. Thus explaining why they keep their job.

The Prima Donna is what happens when this person is in front of the camera instead. Contrast Wag the Director. Can very easily become the film-making equivalent of the Mad Artist. He can often be found making Le Film Artistique — or, at the very least, he'll claim that he'll be trying to make this to get away with throwing petulant tantrums a six-year-old would be called out over.

The Record Producer from Hell and the Acrimonious Producer are the musical equivalents.

No Real Life Examples, Please! Even if it is Truth in Television (plenty of examples can be found in our Troubled Production and Hostility on the Set pages).