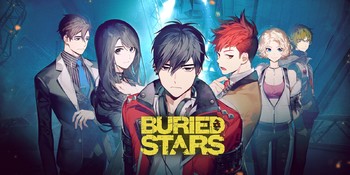 From left to right: Lee Gyu-hyuk, Min Juyoung, Han Do-yoon, Seo Hyesung, Oh Inha, Chang Seil
Buried Stars is a Korean Visual Novel released on July 30, 2020 by Line Games Corporation and Studio Largo for the Nintendo Switch, PlayStation 4 and Playstation Vita, though the Vita version is not being released outside South Korea. An international PC port was released on Steam on November 30, 2021.
Advertisement:

Seoul, October 4 2018, 11:00 p.m. The hit pop music audition survival show Buried Stars, now in its fourth season, is about to commence its current finals with its five survivors.

Everything is all set for the five to be windowed to three, with everything contingent on the votes of fans. This will be a night to remember!

Unfortunately, the building has its own idea of "night to remember."

While the vast majority of the building's denizens are safely evacuated, the five contestants, along with two staff members, are trapped in the wreckage, with only their smart phones—both through calling and through Phater (a Fictional Counterpart to Twitter)—to connect them what's happening on the other side. The situation rapidly decays when the contestants and floor director first come upon the dead body of Shin Seungyeon, then get accused by "S_Seungyeon" on Phater of leaving her to die. Their punishment? At certain intervals, whoever gets placed last will be killed...