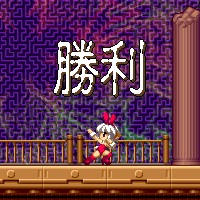 Bunny Must Die! Chelsea and the 7 Devils is a doujin Metroidvania game released in 2006 for Windows PC by Platine Dispositif, the creator of the Gundemonium Series. The game borrows many of the mechanics from Metroid and Castlevania as well as adding many new ones. The most interesting new mechanic in the game is Bunny's ability to slow, freeze, or reverse time. There are also many other abilities, items, and weapons power-ups to play around and experiment with. As an added bonus, there's an unlockable second character that offers a different take on the game's storyline.

The introductory plot is as follows: after being near a cattomic power plant explosion, poor Bunny has been cursed with a pair of cat ears. Soon, a "fat prophet" appears and guides her to the Cave of the Devils to help get rid of her curse. Unfortunately for Bunny upon entering the cave, the "fat prophet" gets attacked by some random steer, gets stabbed twenty four times by its horns and dies. Thankfully the steer just wanders off after killing him, but Bunny is now lost in the Cave of the Devils still needing to find a way to remove her curse.

(click on "1.1" under "Patch Version", requires rev.060916). Bunny Must Die! eventually received an official overseas release by Rockin' Android on September 2012 through Desura, with optional remastered soundtrack (provided by Woofle, who arranged the soundtrack for Hitogata Happa) and slightly updated graphics. It was also featured as part of Indie Royale's Back to School Bundle of 2012 before its official release. The game was also available on GamersGate, Playism, and finally Steam. An updated version of the game was also released in Japan on July 2016 via the PlayStation Store for the PlayStation 4 and Vita, featuring a new art style, widescreen capability, new rooms, and a few other features such as new abilities and a shop which you can access from the menu that grants you some power-ups. Unfortunately, as of June 1, 2019, the game has been removed from Steam and other digital distribution platforms alongside the Gundemonium series at the request of the developer, however the developer has mentioned that these games will be updated in the future. A version based on the PlayStation 4 and Vita version was announced for the Nintendo Switch and was released on July 21, 2022.

Not to be confused with Space Bunnies Must Die, a third-person action game.

Bunny's quest through the Caves of the Devils provides examples of: