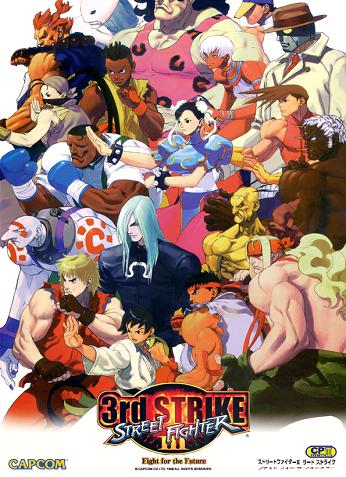 In 1997, Capcom finally released the long-awaited true sequel to Street Fighter II, Street Fighter III: New Generation. It cut the roster of familiar characters down to Ryu and Ken. In their place is a slew of oddball fighters, plus the weirdly-painted tournament organizer and Illuminati leader, Gill.

A second update, 3rd Strike: Fight for the Future, has since become the definitive version. Chun-Li is back in the lineup where she belongs, four new characters are added including the Ensemble Dark Horse "Q", the game is rebalanced, and the spritework was praised as the best in any 2D fighter up to that point.

Given its high demand of mastery, the game is still popular for Tournament Play, giving it some recognition which was denied at time of release. Due to fervent fan requests, Capcom re-released this game on Xbox Live Arcade and the PlayStation Network in 2011 as 3rd Strike Online Edition; it features online play, enhanced visual settings, and other bonus content. The arcade version was later re-released in 2018 as part of the Street Fighter 30th Anniversary Collection on Steam, Nintendo Switch, PlayStation 4, and Xbox One.

WE AWAIT YOUR RETURN... WARRIOR!
Feedback

Little Mel punches his father right in the groin during a sparring match.

Little Mel punches his father right in the groin during a sparring match.