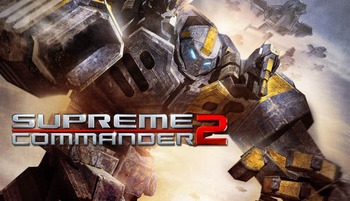 Supreme Commander 2 is the 2010 sequel to the Real-Time Strategy game Supreme Commander. The game takes place twenty five years after the events of Forged Alliance, during which time the Seraphim have been destroyed and humanity has come together in a utopian peace. All is thrown into jeopardy, however, when the president of the coalition is murdered by an unknown party, with the leaders of the United Earth Federation, the Cybran Nation and the Order of the Illuminate blaming each other for the president's murder and taking up arms again.
Advertisement:

Supreme Commander 2 is notable for having a distinctly less hardcore tone than its predecessors. The story is much more light-hearted than in the previous two games, and contains a great amount of humour. Despite the seeming gravity of the premise, the scale of the story never escalates much, and is mostly a character-driven romp. The game is designed around the idea that the economic crash of 2009 would affect the gaming market—graphics were scaled down to allow the game to work on the Xbox 360, as well as on lower-end PCs, as it was assumed that people would not be able to afford expensive gaming rigs. The maximum map size was reduced and much of the game streamlined and simplified to allow for quicker matches, fitting the controls on a gamepad, a lower entry threshold and to remove focus from the economical micromanagement aspects.

Reception of the game at the time was mixed; although Supreme Commander 2 was popular with critics, the game was controversial amongst hardcore fans for its gameplay streamlining, and ultimately the game failed to make the same splash as its predecessors.