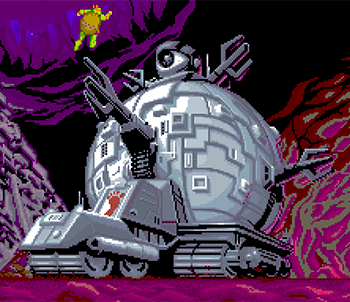 Artist's impression of Technodrome and Turtle, Not Drawn to Scale.
One of the ways a group can keep their base hidden is to keep it moving constantly around the country. Of course, there's no way your typical Elaborate Underground Base will fit into the average mobile home (unless it's bigger on the inside than the outside), but this can make their base less of a sitting duck and allows for strategic considerations (particularly regarding mobilizing units).
Advertisement:

Typically, this vehicle is armour plated and two or three lanes wide, and as a result can just careen straight down the middle of the road/railway. The vehicles are also much faster than their real-life equivalents — the lorries that carry fully-furnished buildings can barely make twenty five miles per hour, on straight, clear roads with police escorts.

Nazi Germany had several plans on the drawing board that would have been Defictionalizations of this trope. Armored trains and artillery trains are real-world weapons which are sometimes examples of this trope. Armored trains were thought to be obsolete after World War I, but the Polish-Soviet War proved that they were still viable, and both the Nazis and the Soviets used them in World War II. Artillery trains are about as old as railroading, and remain viable weapons to this day; they were last used in the Croatian War of Independence, during The Yugoslav Wars.

This trope is for land vehicles only. For bases hidden in boats or flying vehicles, see Cool Boat, Cool Airship, and Cool Spaceship. Mercurial Base is a subtrope dealing with bases on extremely hot planets. Military Mashup Machine often overlaps with this, since a Base on Wheels is just a turret or three away from being a Land Battleship. See Clown-Car Base for when the outward size is more reasonable than its contents. For this trope's much bigger cousin, see Mobile City.