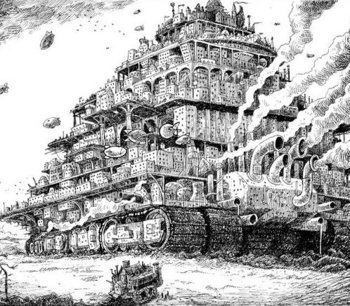 Look! There goes the neighborhood.
Most cities stay put — they're parts of the landscape like mountains, rivers and forests, and one expects them to stay in the place where they were built. Most fictional cities follow this same assumption, but some — chiefly those in more speculative fantasy and science fiction settings — buck the trend and move around.
Advertisement:

The least fantastic version of this is an exaggerated version of how nomadic societies work in real life. A large group of people moves around, carrying tents, large carts or other shelters either in disassembled form or by hauling them around on wheels, and sets up a temporary city when it decides to stop moving. When the group sets off once more, the city is disassembled and carried off until a new spot is chosen. Most fictional examples, however, go further than this — rather than being moved around piecemeal, a city moves as a single, solid block. This typically takes the form of a large platform, with the city on top, given motile power by huge wheels or caterpillar treads. Some examples give the city mechanical legs, sometimes turning it outright into a colossal, animal- or human-shaped Humongous Mecha so big that a respectable community can live in its insides.

Most examples of this take place on land, but moving cities can inhabit other environments as well. Some exist on the sea, ranging from nomadic fleets to masses of ships lashed to each other to solitary vessels the size of cities to giant floating platforms with cities on them. Aerial examples also exist, held up by giant rotors, balloons or good old-fashioned magic or Technobabble and roaming the skies of their worlds; these often overlap with Floating Continent. City-sized spacecraft or space stations, while they technically fall under the definition of this trope, don't usually qualify since, unlike other examples, they are not confined to the surface of a planet. Mobile cities may occasionally have minds/AI of their own too.

The chief issue with such cities is that making a large settlement ambulatory requires a lot of complex infrastructure and some way to keep everything powered, whereas a regular static city just needs someone to build enough houses in the same general area. Consequently, mobile cities tend to be built for very specific reasons. Often, it may be that staying put just isn't an option — perhaps the city consumes too many resources to depend on a single area, or perhaps something, such as climate extremes or enemies, makes staying in one place dangerous. A particularly common science fiction variant involves planets where the day, the night or both cannot be lived through, and the locals need to constantly follow the day-night terminator; for these examples in particular, see Mercurial Base. Alternatively, however, this may be nothing more or less than a cultural tradition or affectation.

Another side effect of these cities is that they make it very difficult for nations to exist, at least in the traditional sense. Keeping track of borders and of whose land is whose can get pretty difficult when every population center can just wander to the other end of the continent should it decide to. As such, mobile city-heavy worlds will either exist under an all-encompassing world government or will have each city be its own self-governing unit, with few hard ties to others. Formal alliances and unions of cities can still exist, but will often be groupings of allied nomad settlements with few or no territorial claims.

This may overlap with Layered Metropolis, in which case expect Urban Segregation to take place on such cities, with the lowest levels dedicated to maintenance workers and engineers tasked with keeping the cities operational (akin to crewmen shoveling coal in boilers on steam-powered ships back in the early 20th Century). The third-class commoners will generally be stuck living in this noisy and polluted environment. The middle levels will usually be the general civilian area with lots of standard middle-class homes, while the uppermost levels are reserved purely for the rich first-class nobles and politicians who call the shots, complete with extravagant manors and castles to boot.

For less extreme cousins of this trope, see Base on Wheels and Moving Buildings. Supertrope to Mercurial Base. Compare Turtle Island. See also Planet Spaceship. Often a variant of a Wandering Culture.

Not to be confused with the city of Mobile, Alabama.