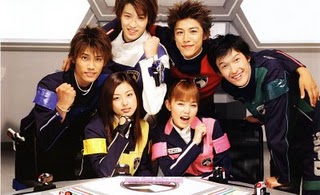 Clockwise from top-right: Ban, Sen, Umeko, Jasmine, Hoji, Tetsu
"S.P.D.: Special Police Dekaranger.
Five detectives who fight with cool, yet burning, hearts.
Their mission: To combat space criminals who have invaded Earth.
They will protect the peace and safety of all humanity!"
Advertisement:

Tokusō Sentai Dekaranger (Special Police Squadron Dekarangernote Deka is a Japanese slang term for "officer-detective"; officially translated as Special Police Dekaranger/S.P.D.) is the twenty-eighth program in the Super Sentai franchise, airing from 2004 to 2005.

20 Minutes into the Future, the Earth has become part of the greater universal picture and ushered in a new era where aliens walk alongside humans in everyday life. Of course, with powerful aliens come powerful criminals, and the elite intergalactic organisation tasked with protecting the peace is the "Space Police".

The story focuses on the Earth Branch of the Space Police, and the five members of its Dekaranger division. Led by legendary commander Doggie Kruger, the Dekaranger are tasked with solving crimes committed by the various alien criminals on Earth. Although the Dekaranger have the authority to execute the most dangerous of criminals, they must obtain approval from the highest court in the galaxy before they can do so.

Partnered with the Kamen Rider series Kamen Rider Blade before concluding its airing alongside the first episodes of Kamen Rider Hibiki in the Super Hero Time block. This series was adapted into Power Rangers S.P.D.

The series is composed of a number of individual case files, loosely-connected by the presence of the shadowy Agent Abrella, a black market Arms Dealer who supplies many of the villains with their equipment.

In 2015, a "Ten Years After" Reunion Show (much like the one Hurricaneger had two years before) was announced. The trailer can be viewed here.

GOT YOU! With this, trope page COMPLETE!