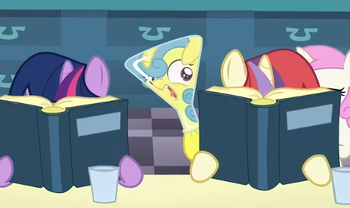 "HELP! GET THIS OFFA ME!"
"You guys hear something?"
Jessie: HEGH MEH! MAH FAH IIH SUH! (Help me! My foot is stuck!)
Cloud: I DON'T CARE IF YOU WANNA F**K! WE GOTTA GO!
— Final Fantasy VII: Machinabridged
Advertisement:

An instance when a character (let's call him Bob) gets stuck in a tight spot and cannot get loose without help. This can be played for humor, if Bob's predicament is more annoying or humiliating than dangerous; or it can be played for drama, if Bob is immobilized in the path of imminent danger or in an isolated area where he is unlikely to be rescued, and may even end in a Life-or-Limb Decision. If there are other characters nearby, expect them to either laugh at Bob's misfortune or try to help him get free, depending on the nature of the characters and the seriousness of the situation.

This trope does not apply to instances where a character briefly slips or gets a foot caught but is able to pull free after a second or two. Those are just little beats to show that this trope could happen and thus increase the tension.

While mostly a comedy trope, can also be used for Fanservice if the person getting stuck is, say, a young lady with nice legs and/or a shapely rear.

Sub-tropes include Stuck in the Doorway, Stuck in a Chimney and Clutching Hand Trap. Compare Cat Up a Tree, which may or may not involve this depending on the cat. Broken Heel is a situation where a fleeing character is crippled or slowed, with a similar need for rescue.