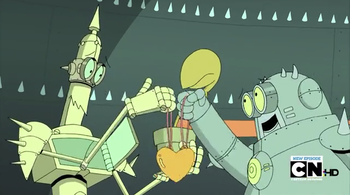 "Blastus is right, I think you two just need to admit you belong together, just like me and my buddy."
Advertisement:

A Friendship Trinket is an object that is kept by one or two characters to symbolise their friendship or trust towards another character. The item is often something the friends had since they were children such as hair ornaments, necklaces or something that has been split in half for them to share. It can also be given as a token of gratitude after one character saves or helps another.

If this precious keepsake is lost, stolen, or damaged, expect the owner to try to frantically recover or fix it, thinking that their relationship with their friend will be severed if they don't.