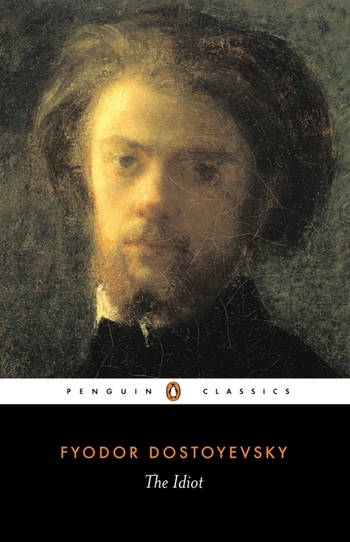 For a long time now I’ve been tormented by a certain idea, but I’ve been afraid to make a novel out of it, because the thought is too difficult, and I’m not ready for it, though it’s thoroughly tempting thought and I love it. The idea is — to portray a perfectly beautiful man. Nothing, in my opinion, can be more difficult than that, especially in our time.
— Fyodor Dostoyevsky, in a letter to Apollon Maikov, January 12, 1868
Advertisement:

The Idiot (Идиот) is a novel by Fyodor Dostoevsky, originally published serially between 1868 and 1869.

Prince Lev Nikolayevich Myshkin returns to St. Petersburg after a several-year stay at a Swiss sanatorium. He had received treatment for epilepsy and supposed mental deficiencies, and now that his treatments are at an end, he’s eager to “be with people” again.

What Prince Myshkin finds within his very first day on Russian soil are people who, whether nobility or lower class, whether old Orthodox or young nihilists, are constantly struggling against each other: struggling for social status, for money, or for romantic conquest. He meets the brooding and passionate Rogozhin, the bitterly philosophical Ippolit, the possibly-mad femme fatale Nastasya, the capricious daughter of nobility Aglaya, and the vain but ordinary Gavrila.

These people, with their crossed purposes and intrigues, are a keg of gunpowder, and Prince Myshkin’s noble qualities—his kindness, humility, and surprising forthrightness— are the spark that sets them off. Because of Myshkin’s innocence, nearly everyone assumes him to be a fool, and either immediately takes him into their confidence, or tries to exploit him outright. The results are alternately tragic and darkly comic.

In 1951 it received a Setting Update to Japan, in a film directed by Akira Kurosawa. In 2003, the novel was adapted into a rather well-received (Russian) miniseries directed by Vladimir Bortko.