Series / House of the Dragon 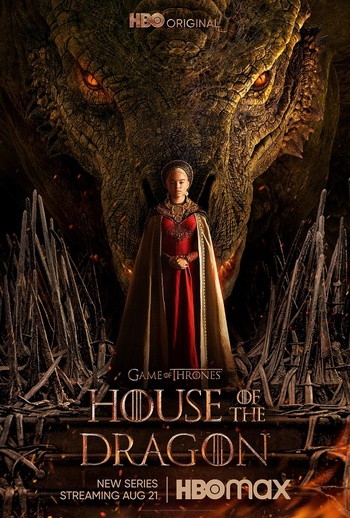 "Men would sooner put the realm to the torch than see a woman ascend the Iron Throne."
"Dreams didn't make us kings. Dragons did."
— Prince Daemon Targaryen
Advertisement:

The series returns to the realm of Westeros and starts 172 years before the birth of Daenerys Targaryen, focusing on the war of succession known as the "Dance of the Dragons", which divided her ancestors of House Targaryen, the Valyria-descended ruling dynasty of Westeros who have based their power on the use of dragons since the days of Aegon the Conqueror.

After Queen Consort Aemma dies in childbirth without bearing a surviving son, King Viserys Targaryen makes the controversial decision to name his only surviving child Princess Rhaenyra heir apparent ahead of his volatile younger brother, Daemon. However, Viserys also remarries to Alicent Hightower, the daughter of his ambitious Hand of the King Otto Hightower, alienating Rhaenyra; and while Viserys stands firm by his vow to have his eldest daughter succeed him, this second marriage produces several children who survive into adulthood — including Alicent's firstborn son, Aegon.

In the following decades, rival factions of the Targaryen family and their allies — the Blacks and the Greens — form around Rhaenyra and Alicent. Though these two women were once the closest of friends, the struggle between the princess, the queen, their supporters and their children over who will succeed Viserys and claim the Iron Throne inevitably becomes deadly... and threatens to burn Westeros to ashes.

The show was ordered by HBO for a full 10-episode first season and premiered on August 21, 2022. Less than a week later, HBO formally announced that it has been renewed for a second season, which is set to premiere in 2024. According to Martin, the show will need at least four seasons to complete the arc he intends for the Dance of Dragons.

The confident princess Rhaenyra arrives on her golden dragon.

The confident princess Rhaenyra arrives on her golden dragon.