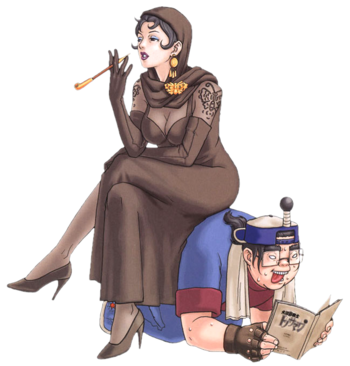 "She treats him like dirt, but I think he likes it."
Advertisement:

The most common way to introduce this is an Unequal Pairing, for example, between an Emperor and a commoner, between a teacher and a student, between a mistress and her servant boy, or between a mortal and a powerful sorceress. For the trope to come into play, the inequality has to be lampshaded: for instance, the sorceress may jokingly tell her lover something like "If you upset me, I will put a curse on you". Formally equal pairings may also be subject to the trope, if, for example, a girl gives a Prank Punishment to her boyfriend or vice versa.

If someone's fetish is powerful people in general (big bosses, politicians, etc.), it's Power is Sexy.

This may be one of the results of Belligerent Sexual Tension. Also related to Romantic Ribbing, Weakness Turns Her On, Mischief for Punishment, Amazon Chaser, I Love You Because I Can't Control You, A Match Made in Stockholm, All Girls Want Bad Boys, and Aren't You Going to Ravish Me?. Milder versions of this may also overlap with Trickster Girlfriend.