Literature / The One Who Eats Monsters 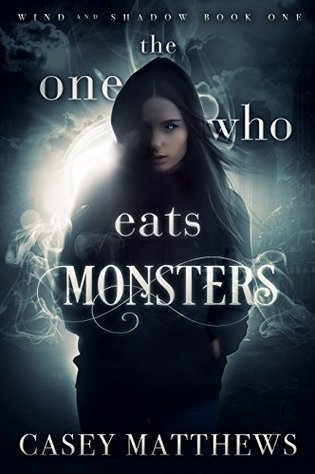 "The dark is terrible, surrounds you, and is never empty as it seems. Though monsters lurk, know this: none is hungrier than me."
— Ryn

The One Who Eats Monsters is a 2017 YA urban fantasy lesbian romance novel by Casey Matthews. Long ago, before history split in two, the elder monster Erynis was banished from civilized lands, never to be welcome among gods or kings. Fast forward untold millennia to the modern day, and a temporarily weakened Ryn is captured by a gang of nuclear arms smugglers, and then later "rescued" by the US military. The military mistakes her for a feral child, and brings her back to the US.

Turns out there's a loophole in the ancient banishment that allows Ryn to enter the United States if she was invited by its people. Unfortunately, the banishment still makes her subject to human laws, so she can't just escape from the mental institution they place her in. Luckily for her, eighteen months later, funding cuts force the institution closed, and Ryn is released into a group home. With her newly regained freedom, she goes back to her life's purpose; Hunting and consuming monsters both human and supernatural. On one of her night time hunts, she runs across Naomi Bradford, daughter of a Republican senator, and finds out that a cabal of spirits (here called Asura) is targeting her for assassination. Naomi is rather pretty and her soul smells nice, so Ryn makes an unbreakable vow to protect her.