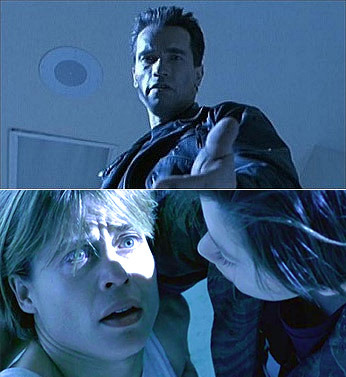 It's okay, Sarah. He's on your side this time.
"If she was alive out there and saw you coming all methed out with your buck knife and geek ears around your neck, she would run in the other direction."
— Shane Walsh to Daryl Dixon, The Walking Dead
Advertisement:

The Distressed Damsel and/or Dude is sitting in their cell with head in hands, or hanging by a thread from a cliff, when suddenly, the door is broken down, or a head peeps over the cliff edge. Joy turns to terror as he or she realizes it's The Dragon (who unbeknownst to them has made a Heel–Face Turn), an Eldritch Abomination, Fluffy the Terrible, a Killer Robot... and so on.

Usually it'll only be temporary until someone fills the rescuee in on current events, although it may lead to Complaining About Rescues They Don't Like. Sometimes it'll turn out they actually are in worse danger now such as with a Villainous Rescue or Destructive Savior.

A Dark Messiah can be this on a global scale. See also Horrifying Hero and Terror Hero who tend to cause this reaction even when being 100% good.