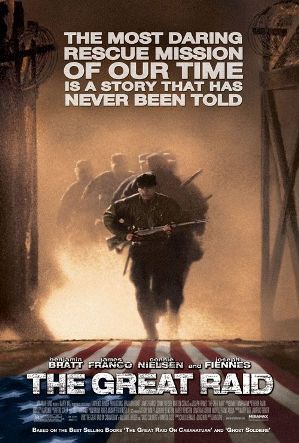 The film opens in September 1944, with the Pacific War turning against Japan's favor. Increasingly desperate, the Japanese Army high command issues an order to liquidate all of its Prisoner-Of-War camps in their occupied territories in the event that an American invasion is likely. We then cut to one of these camps in the Philippines, where American prisoners are herded into makeshift air-raid shelters and then executed by being lit on fire and being shot with machine-guns. The next scene takes place in January, 1945, in the wake of the successful landings by the US Army at Lingayen; Lt.Col. Henry Mucci and his 6th Ranger Battalion are tasked with rescuing American POWs held in Cabanatuan, before the Japanese can repeat what they did only a few months prior. The problem is that the Japanese have a strong garrison located in the towns near the camp in question, while the closest conventional American forces are still days away. With the help of Alamo Scouts and Filipino guerillas, the Rangers set out on their mission to liberate the POWs.