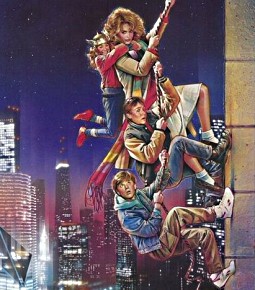 Albert Collins: Some guys are out to get 'em, and the girl's probably dead. She ain't got a nickel.
Kids: And we should be in bed!
Collins: And you outta luck.
Advertisement:

It was just a simple babysitting job, Gone Horribly Wrong.

Chris Parker (Elisabeth Shue) finds herself with nothing to do after her boyfriend breaks off their scheduled date, so she agrees to spend the night babysitting the Andersons' children Sara (Maia Brewton) and Brad (Keith Coogan).

Then her friend Brenda (Penelope Ann Miller) calls in a panic, having tried to run away from home with just enough money to cover cab fare to the bus station and the cost of a payphone call, and she asks Chris to pick her up in the city. Chris can't leave her charges behind unsupervised, so she takes them and Brad's friend Daryl Coopersmith (Anthony Rapp) along with her. She gets a flat on the highway en route, then realizes she forgot her purse. Things just get more crazy from there.

Chris Columbus' directing debut, and the first starring role for Shue, this 1987 comedy was also the first PG-13 film released by Disney (albeit under the Touchstone Pictures label, to avoid the association with strictly family content).

The Disney Channel produced a Lighter and Softer remake in 2016. Sabrina Carpenter (Girl Meets World) leads a (much) younger cast as the film's babysitter. Tropes specific to that production go here.