Recap / Doctor Who 50th Prequel "The Night of the Doctor" 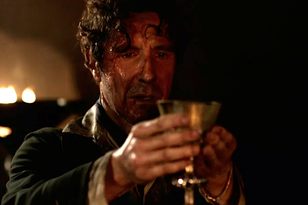 "I'm a Doctor.... though probably not the one you're expecting."
Advertisement:

The one that at long last resolved the mystery of a disappeared Doctor.

And the origin of a warrior who rejected the namesake, and who himself disappeared before we even knew him.

The Night of the Doctor is a Doctor Who mini-episode written by Steven Moffat, which was put up by the BBC on 14 November 2013. It is a prequel to "The Day of the Doctor". For viewers who hadn't seen Paul McGann since 1996, and for BBC Radio 4 and Big Finish listeners who'd followed him for years, it gave closure for a Doctor who was long overdue a swan song.

All seems lost for Cass, the sole occupant of a spaceship crashing into the planet Karn, when a rescuer appears — but probably not the one you were expecting. It's the Eighth Doctor! The Doctor offers to whisk Cass to safety and show her the universe, but upon realising the Doctor is a Time Lord, she refuses, horrified by how the Time Lords have ravaged the universe in their war with the Daleks, despite the Doctor's insistence that he is "one of the good" Time Lords and that he is a conscientious objector to the war. Refusing to leave Cass behind, the Doctor stays on the ship until it crashes on the planet's surface.

The Sisterhood of Karn digs him out of the wreckage, and brings him to a nearby cave. The Doctor awakens, and the leader, Ohila, tells him that he actually died for good in the crash, but the sisters have prolonged his life by a few minutes so he has a chance to regenerate, as they know that the universe still needs him. Ohila also presents him with a special opportunity: The sisterhood have mixed a series of elixirs that will allow the Doctor to choose what kind of person he will become when he regenerates, and Ohila implores him to choose one that is capable of putting an the end to the Time War which threatens all of existence. The Doctor states that he has always been determined to stay out of the Time War, and would rather die than go against his conviction. Ohila retorts that he is, in fact, already dead, asking him how many more need to follow him into the grave. This finally causes the Doctor to succumb to Ohila's persuasion. Deciding that that he needs to act, he bids a final goodbye to Cass' corpse and to his companions Charley, C'rizz, Tamsin, Lucie, and Molly. He chooses the elixir that will turn him into a "warrior", and with an agonising scream, regenerates into the War Doctor.

He begins this next life by snatching the bandolier from Cass as a reminder of what his new existence must be dedicated to. He buckles it across his frame, glances into a reflection, and we see the fresh face of a stern, unflinching warrior. It's the CGI'd head of John Hurt cleverly disguised from a still frame of one of his past movies. 73-year-old Hurt does his best impression of himself as a younger lad and speaks the words that will (supposedly) set the War Doctor apart from the other incarnations.

The War Doctor then goes off to fight in the Last Great Time War offscreen. Centuries pass. He gains a new outfit, then does a good job of getting it beaten up in battle. He's got a new sonic screwdriver, the first incarnation with a diode model common to all the post-movie Doctors, that now sits in his bandolier. His hair turns gray, his skin wrinkles, and he grows a full Beard of Sorrow unlike the clean-faced Doctors before him. He suffers through 400 years of combat and has an especially upsetting adventure that pushes him over the edge. We pick back up with his story onscreen much later in his life, when he's at the end of his rope and had all he can bear of the Time War... so the War Doctor finally decides...

Alternative Title(s): The Night Of The Doctor