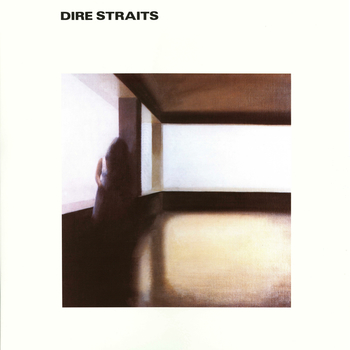 "You feel alright when you hear the music ring."
Advertisement:

Dire Straits, released in 1978, is the self-titled debut album by British roots rock band Dire Straits. The band, born out of frontman Mark Knopfler's previous failed attempts at etching out a career in music, first attracted the attention of the music industry via a demo tape that impressed BBC radio jokey Charlie Gillett, whose advice the band sought out of respect for him. Gillett, impressed with what they had recorded, played "Sultans of Swing" on his radio show Honkey Tonk, attracting the attention of Vertigo Records.

The album that resulted from this was a major commercial success— a far cry from the band's initial financially strained situation that had lent them their name— spending 132 weeks on the UK Albums chart and peaking at No. 5. The album was also a major international success, topping the charts in France, Germany, and Australia and reaching No. 2 on the Billboard 200; Dire Straits would go on to be certified double-platinum in both the US and UK. Lead single "Sultans of Swing" additionally peaked at No. 8 on the UK Singles chart and No. 4 on the Billboard Hot 100.

Dire Straits was supported by two singles: "Sultans of Swing" and "Down to the Waterline".

You remember we used to run and trope in the shadow of the cargoes: