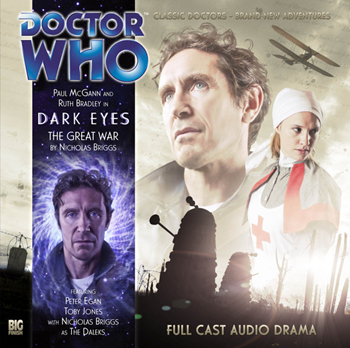 The first installment of the Dark Eyes saga, which sees the Eighth Doctor don his second outfit and Ruth Bradley debut as companion Molly O'Sullivan.

This audio also a marks a big turning point for the Eighth Doctor- a very recognisable and permanent Tone Shift into darker and downcast territory, establishing the mindset that would eventually lead the Doctor to the planet Karn and his destiny.

After the trauma of "To The Death", the Eighth Doctor, rather broken, tries to find a reason to continue living. He tries to steer his TARDIS to the end of existence, to look back on time itself and maybe find some small glimmer of hope. When he can't quite make it, he takes an axe to the console in a desperate hope of triggering enough of a power surge to get the rest of the way there. Instead, he's stopped by Straxus of the Gallifreyan C.I.A., who's returning to send Eight on yet another Time Lord mission...

And Now For Something Completely Different. Molly O'Sullivan, a young Irishwoman, has followed her lady Kitty into France to become World War I medical volunteers together. Kitty is now dying from gangrene, and Molly is wrecked with Survivor Guilt and pain. She's not in any mood to deal with a wounded long-haired man in velvet who calls himself "The Doctor". However, when someone claimed to be a doctor starts giving Eight a blood transfusion that will kill him for good, Molly decides to save his life and try to get him away from the inexplicably glowing mustard gas attack that's approaching. The gas destroys what was left of Kitty, and Molly, now with even less to live for, follows the Doctor. Then, because Eight is the universe's cosmic plaything and his day can get worse, it promptly precedes to do just that; they're rather rudely interrupted by Nicholas Briggs and his ring modulator because are you really surprised that the intergalactic murdering Fell Saltshakers would show up at this point?