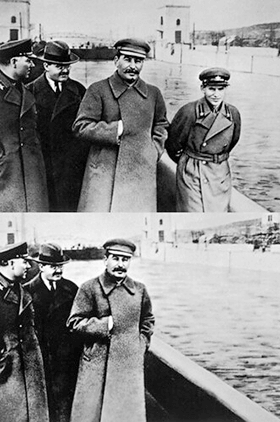 The consequences of falling out of favor with the Father of Nations.
"Nothing will remain of you; not a name in a register, not a memory in a living brain. You will be annihilated in the past as well as in the future. You will never have existed."
— O'Brien, 1984
Advertisement:

: the systematic removal of all evidence of a character's existence, either through mundane conspiracy or a little bit of Applied Phlebotinum (e.g., Laser-Guided Amnesia). The purposes for doing so vary. This is more commonly done in enclosed or isolated areas, where it's easier to track evidence. This can lead to characters tracking the shreds of evidence the hiders left behind. Often any shred of evidence they find will disappear when they show someone. If they dig too deep or get too involved in their search, there's always the danger that they too will disappear depending on the circumstances.

Damnatio memoriae (Latin for "damnation of memory") often relies on the fact that history is Written by the Winners, and of course, the winners would always like to remove evidence of opposition against their rule as a warning for others and to perpetuate their power. It is also done for other purposes, such as literally condemning questionable acts done by the person in his lifetime to deter possible future offenders.

This effect isn't always someone's deliberate decision. History is largely reconstructed from the records of the time, and will have gaps of information when those records do not exist or get destroyed — e.g. in ancient times, when very few people wrote, and most documents are now lost (paper, papyrus and similar materials do not last forever). Another typical example is the people that were largely ignored during their lifetime and did nothing that gave them a place in history, as the records about an average Joe are fewer and harder to locate than those of public figures. A man whose historicity is very complicated is Jesus; see Historicity of Jesus

in the other wiki (which is, in short terms, what we know about Jesus outside of The Bible).

This trope is Older Than Feudalism — traitors and other such undesirables in the Roman Empire were known to be given this treatment. The Other Wiki's article on it shows Roman murals that have had unwanted people's faces chiselled out of them.

See also I Have No Son! (where a child is disavowed by their family), Expendable Clone (where clones aren't given person status, or it's revoked upon discovery they're a clone), I Was Never Here (when this trope is requested on one's own behalf) and Name Amnesia (when characters accidentally or intentionally un-person themselves). Compare Ret-Gone, where the affected person is literally erased from existence, and It's a Wonderful Plot, where they are not, but it's shown what the world would be like if they were. Contrast Invented Individual (who never existed but is made to appear that they do), Death of Personality (when someone ceases to exist from their perspective), the Outlaw (whose existence isn't covered up but no longer exists legally) and The Spook (who actively works to keep themselves unpersoned). Enforcement of this trope may take the form of The Scottish Trope. If the unpersoning is executed poorly, it may lead to the Streisand Effect (see Herostratus under Real Life — History). When this happens because of meta reasons, for example, if there are copyrights or other laws involved and someone cannot use a certain character anymore, or because the writers have just opted to write them out with no explanation, see Chuck Cunningham Syndrome. When Gods Need Prayer Badly, this is a good way to kill them. When there is No Such Thing as Bad Publicity, this is often the best punishment. Not to be confused with a UN person. See Persona Non Grata when someone is told in no uncertain terms never to return.