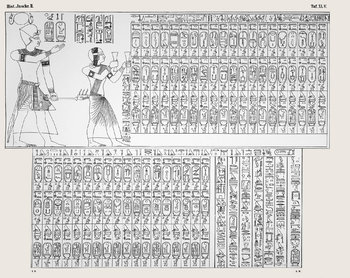 The Abydos King List, one of the sources egyptologists have used to reconstruct the chronology of ancient Egyptian dynasties.
Advertisement:

Ancient Egypt was the second civilization in the world (after ancient Mesopotamia) to invent writing, with bits of proto-hieroglyphs being dated to the 33rd century BC. As a result, its history is extremely long. People tend to forget this: Egyptian history from the earliest extensive records in the 31st century BC to the Macedonian Conquest in 332 BC spans 2700 years. Consider this: to Jesus or Julius Caesar, the first Egyptian kings were 1000 years more ancient than either of them is to us; to the builders of the Pantheon in Rome, the Great Pyramid was older than the Pantheon is to the designers of today's skyscrapers. Even the Ancient Egyptian "golden age" of the Eighteenth and Nineteenth Dynasties was as far removed from them as the Early Middle Ages are to us—the world of Ramses II was as far back for Augustus as Charlemagne is to Barack Obama. Almost any trope recorded in Ancient Egypt is therefore by definition Older Than Dirt.

Ancient Egyptian history is conventionally divided into ten periods. They are generally identified with dynasties, which unlike the dynasties of other states were numbered rather than named. Not all dynasties were necessarily different families; different dynasties were often separated from each other for historical reasons. Moreover, sometimes members of the same "dynasty" were only related by marriage. The term refers more to a broad family and its followers rather than a specific patrilineal line of descent (as was usually the case in medieval Europe and throughout history in East Asia). Some dynasties even overlapped with one dynasty reigning over part of the country and the other over another part, sometimes on friendly terms and sometimes at de facto war with one another.

Important note: names of Ancient Egyptian places are most often not what they were called in Ancient Egyptian. Most of the place names in English are actually Greek, as the Greeks seemed to have had a collective case of Egyptomania (seriously, the Pharaoh gave the Greeks the entire city of Naucratis, there were so many of them) and wrote incessantly about it (Herodotus in particular was a big fan). This extends to the name of Egypt itself, which derives from the Greek Aigyptos (via the Latin Aegyptus). Aigyptos in turn appears to derive from the Greeks' best attempt to render "Hwt-ka-Ptah" ("Home of the Soul of Ptah"), a New Kingdom-era name for Memphis (originally applied to the city metonymically from the great temple to Ptah it housed); Memphis (which throughout Egyptian history was usually the largest and richest city of Lower Egypt, if not all Egypt, and the administrative center of everything from the Faiyum to the coast) appears to have been the main destination of the Mycenaean-era Greeks who traveled to Egypt for trade and diplomatic missions. Egypt's true name was "Kemet", referring to the fertile Black Silt Land that the Nile delivered to them annually to sustain their lives. An example of this is the name of the city of Thebes—that was a Greek mishearing of an Egyptian term for the big temple, which they conveniently turned into the name of a city in Greece, but the Egyptians actually called the city Waset (or something similar). On the other hand, personal names tend to be modern guesses at the actual Egyptian—a somewhat problematic endeavor, as Egyptian writing leaves out even more vowels than modern Arabic and Hebrew—although some Greek names persist (e.g. Cheops for Khufu).

What follows is a very high-level overview of the history. Many, many sources are available for more detailed histories; for an accessible narrative audio history, The History of Egypt Podcast

by Dominic Perry is a good (and engrossing) introduction in English (in a delightful Kiwi accent)—and by a trained Egyptologist no less!

In 332 BC, Egypt was conquered by Alexander the Great and became part of Hellenistic civilization under the Ptolemy dynasty following the Macedonian Succession Wars, the last (and arguably most famous) sovereign being Cleopatra VII Philopator. Egypt would be part of various empires until the 19th century; while it fairly frequently hosted the capital of such empires, and was almost as frequently rather autonomous when it didn't, these empires were uniformly ruled by and for people of non-Egyptian stock. Egypt would not be ruled by someone of Egyptian stock (President Muhammad Naguib) until 1953. Egypt has since changed its religion twice (first to Christianity, then to Islam, though a Christian minority remains) and its language once (from Coptic, the descendant of Ancient Egyptian that still sees limited use as a liturgical language in Egyptian Coptic Christianity, to Arabic) but still markets itself as a continuation of the old pharaohs (just look at any tourism advert).

The legacy of Ancient Egypt in the modern country is mixed. On the one hand there's no doubting that Egypt is now part of a wider Islamic and Arabic-speaking culture—and is indeed the heart of the Arab World. On the other, certain aspects of life in Egypt—particularly aspects of music, cuisine, and certain holidays and folkways—still bear echos of the time of the pharaohs. An old joke in the Arab World is that "he who rules in Damascus is always a governor, and he who rules in Cairo is always a pharaoh." On an economic front, there has also been both continuity and change. On the one hand, until the completion of the Aswan Dam in the 20th century, the rhythm of the agricultural year was unchanged since the time of the men who built those pyramids on the Giza Plateau so many millennia ago. On the other hand, since then, the rhythm has been lost, as has the old crop profile—Egyptian farmers now mostly raise rice (and tomatoes) for domestic food needs and sugarcane and fruit for export to Europe, instead of raising wheat and barley as staples and grapes for the pharaoh's wine cellar. On the other other hand, Egyptians both ancient and modern are known to have favored alliums—particularly onions, but also garlic.