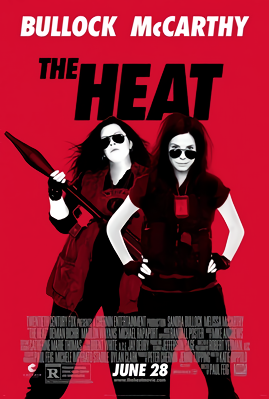 If you can't stand the Heat, stay out of the Kitchen (because that's where Mullins keeps her weapons)
Advertisement:

The Heat is a 2013 action-comedy starring Sandra Bullock and Melissa McCarthy. It is directed by Paul Feig.

Sarah Ashburn (Bullock), is an uptight, by-the-books FBI special agent. She is forced to team up with Shannon Mullins, a foul-mouthed and abrasive detective (McCarthy) in order to take down a drug lord.

Not to be confused with Heat.