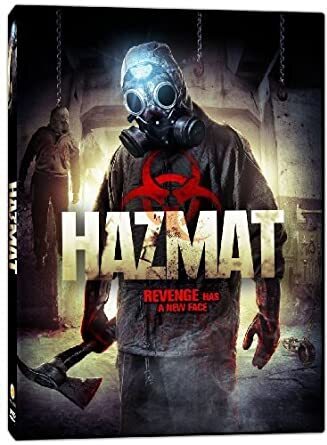 Hazmat is a Horror Film by Lou Simon.

Gary (Giordan Diaz) is the host of Scary Antics, a Scare Tactics-esque Reality Show that helps people pull scary pranks on their friends. Lately, the show's ratings haven't been doing too well, and they're banking on their latest episode to help turn things around.

Their latest mark is Jacob (Norbert Velez), a rather creepy young man who's friends have recruited Scary Antics to give him a scare that they hope will make him give up his unsettling interests so he can act like a normal person around them. They decide to have the scare in the abandoned warehouse where Jacob's father used to work, which experienced a fire back in The '60s.

Unfortunately, Jacob's fight-or-flight response makes him kill their professional scare actor, Tim (Mario Nalini), which leads him to discover that he's being pranked. And he doesn't take it too well. Soon enough, everyone is holed up in the control room, trying to figure out how to escape from Jacob's wrath.