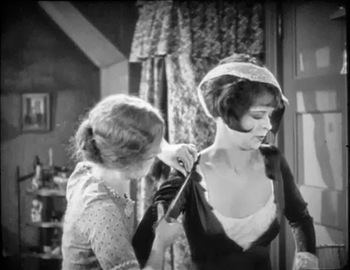 JoJo characters dress on the cutting edge of fashion — which is to say the clothing has all been chopped up with a straight razor.
— So This Is Basically... JoJo's Bizarre Adventure
Advertisement:

Got an ugly, matronly, or just uninspired-looking item of clothing or dress? Rip it good. In fiction, using your own resourcefulness and a pair of scissors (or not even the latter), you can make that old rag into something fashionable (and/or Stripperiffic).

Basically, a deliberate application of Clothing Damage. The Action Dress Rip is a more practical and action-oriented version of the trope. From Dress to Dressing is the one where you rip your dress to make a bandage.

Has absolutely nothing to do with Rip Taylor, or Rip Torn for that matter.