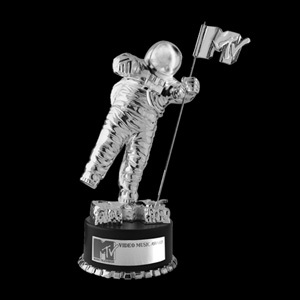 The MTV Video Music Awards or VMAs is an annual awards ceremony held by MTV honoring music videos and artists.

The ceremony was initially meant to be the alternative to the Grammys, both in honoring contemporary artists as well as having an "anything goes" approach to the live show, featuring outrageous moments from the hosts, presenters and performances. Madonna's performance on the very first show would see her performing "Like a Virgin", while descending down from a wedding cake set piece in a wedding gown/lingerie hybrid outfit, rolling around the stage and writhing suggestively. From that point, the Refuge in Audacity would escalate year after year from artists and their performances until around the The New '10s when it was dialed back several notches due MTV's declining popularity in the mainstream landscape, and millennial/Gen-Z teens and young adults being harder to shock and surprise, barring a Miley moment or two.

Still, the VMAs are still one of the more respected awards and awards ceremonies due to the legacy. Despite declining TV ratings year after year, the ceremony still remains one of MTV's highest-rated events of the year and one of the most engaged topics in social media when it airs.

Notable moments from the VMAs:

The categories for the VMAs typically are:

The Michael Jackson Video Vanguard Award was the "lifetime achivement" award given to artists and directors that made a profound impact in popular culture and music, though this appears been replaced. The inaugural Tricon Award was first awarded to Lady Gaga in 2020, possibly in a move distancing the award from Jackson in the wake of the Leaving Neverland documentary, in which two accusers recount alleged sexual abuse from Jackson. Foo Fighters received the Global Icon award at the 2021 ceremony, an award given out at the MTV Europe Music Awards. The Video Vanguard award made its reappearance during the 2022 ceremony in which it was given to Nicki Minaj.

Winners for Video of the Year