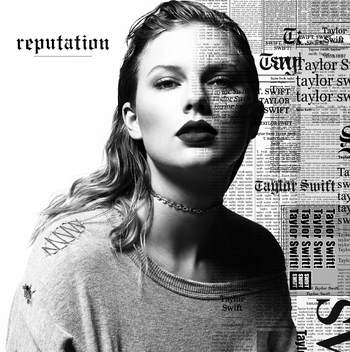 … Are you ready for it?
"Let me say it again, louder for those in the back …
We think we know someone, but the truth is that we only know the version of them they have chosen to show us.
There will be no further explanation
There will just be reputation."
— The reputation lyric book
Advertisement:

Reputation (stylized reputation) is the sixth studio album by American singer-songwriter Taylor Swift. It was released on November 10, 2017, as her final album with Big Machine Records.

It marks a shift from the dreamy Synth-Pop of her previous album, 1989, to heavier electropop with more prominent Hip-Hop influences and darker lyrical themes that center around fame and celebrity, public image, and the dangers of mistaking reputation for reality. It is, for lack of better words, a singularly meta album.

It became the second highest-grossing album of 2017 (first in the US), selling over a million copies in its first week and 4.5 million total and reaching #1 in 13 countries. It was nominated for Best Vocal Pop Album an the 61st Grammy Awards. A concert film of the Reputation Stadium Tour was released on Netflix on December 31, 2018.

Look What You Made Me Trope: