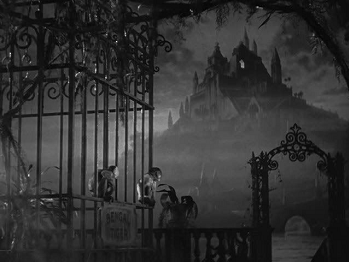 "If I were gonna haunt somebody, this would certainly be the house I'd do it in."
—Lance Schroeder, House on Haunted Hill (1959)
Advertisement:

You know that old, foreboding house up on the top of the hill, surrounded by thick forests, and accessible only by a single bridge that has a tendency to wash out during every rainstorm? Yeah, that one. Have you ever noticed that it always seems to attract eclectic groups of strangers who get invited for the reading of a will or a dinner party with a mysterious host? And why is it that the strangers keep getting killed off, one by one, during the night? It must be one of them doing it. But which?

Expect many passageways hidden behind bookcases, usually operated by candlesticks, portraits with removable eyes for spying, and the ubiquitous thunder and lightning. Almost inevitably, all methods of communication with the outside world will have somehow ceased to function, if they ever existed at all... especially telephones. (This was more plausible in the early 20th century, a.k.a. Agatha Christie Time, when many old dwellings had not yet been fitted with telephones and service in general was commonly more apt to fail.) You can also expect the lights to go out several times during the night. (Usually when it's least convenient.)

May or may not be haunted or have some curse or be hiding a Dark Secret. If the mystery is set in Europe, this may be a castle instead of a mansion. See also Haunted House and Haunted Castle, which usually are haunted. Symbolic Glass House is the inverse, but often has the same effect.

In this trope, while a haunting may be real, it is more likely that the mysterious poltergeist is an elaborate hoax.

Please keep in mind that not any old house with poor lighting will do for this trope. This is a classic trope of, and a great set piece for, whodunnit murder mysteries.