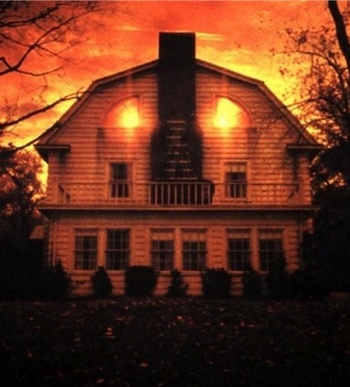 The Amityville Horror is a 1977 horror novel by Jay Anson, and the work that launched the Amityville franchise.

The newlywed Lutz family moves into their new home at 112 Ocean Avenue in Amityville, New York, a suburban community on Long Island's south shore. It's a Big Fancy House with its own waterfront boathouse, plenty of room for their three children, a shockingly low price tag... and, as they find out after they sign the paperwork, a dark past. It seems that just over a year before the Lutzes moved in, the house was the scene of a grisly multiple murder in which eldest son Ronnie DeFeo killed his sleeping parents and four siblings. The house's history doesn't deter the Lutzes, who are determined to make a fresh start in their new home.

Less than a month after moving in, the Lutz family flee in the middle of the night, leaving all their belongings behind.

The tale they told was of a demonic presence that filled rooms with flies in the dead of winter, visited their youngest daughter in the form of a red-eyed pig, caused the walls to drip with black goo, and led the entire family to wake up in the middle of the night, every night, at the same exact time when the DeFeo murders took place... all of which made father George Lutz begin to see his family as disposable.

Ever since its publication, The Amityville Horror has taken its place as the most famous haunting in America, with plenty of hot debate on whether the book represents irrefutable proof of the supernatural or if it's all Based on a Great Big Lie. The novel was originally adapted into film in 1979 and has since become something of a Franchise Zombie, with subsequent books and films growing ever more tangentially connected to the original family and case. Later sequels don't even take place in the house itself, but involve purportedly haunted objects from the original house, including a haunted lamp, a haunted mirror, a haunted dollhouse, a haunted clock, and a haunted vibrator (no, really

). The original Amityville Horror movie was itself remade in 2005.