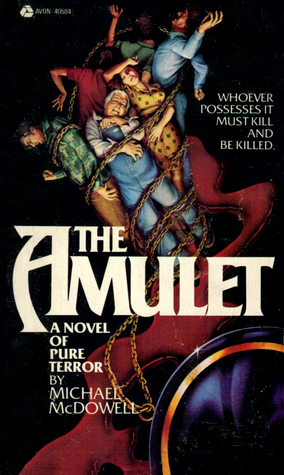 The Amulet is a 1979 horror novel by Michael McDowell.

When a rifle explodes in the face of Dean Howell, leaving him disfigured and in a vegetative state, his mother Jo blames everyone in the small town of Pine Cone, Alabama, where the rifle was manufactured, including Dean's wife Sarah, whose only contribution in the rifle manufacturing plant was affixing two screws to the stock.

When Jo gives a strange amulet to the man she believes most responsible, it sets off a gruesome series of events. Sarah must race against the amulet's malevolent influence to stop the tide of death, before Pine Cone is nothing but a bloodbath.