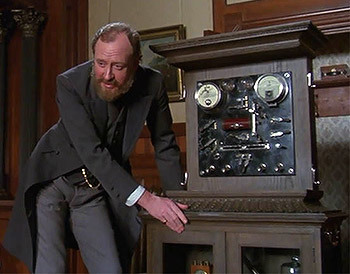 A typically faceless object is found that inexplicably resembles the face of another person, usually a historical figure. Sometimes the one possessing the object may believe for a moment that the historical figure that the item represents is talking to them. The visage may also represent a religious figure, such as Jesus, and will be believed to be a holy sign from above.

There is a grain of Truth in Television to this trope: Psychologists are certain that the human brain is hard-wired to recognize faces. This condition is called pareidolia.

This tendency is so strong, it leads people to perceive "faces" in totally random things such as the pattern of browning on a piece of toast or the weathering of a rock, or strange shapes in the clouds, even though they're nothing more than optical illusions.

This trope is in effect only when the object doesn't intentionally look like a face (or is, but isn't supposed to be recognized as such), but people swear it does. Weathering on a rock counts, but not a statue, a carved coin, or Rushmore Refacement. Seeing a face in a potato, burnt toast, or corn chip counts, but not a miniature gummi of the Venus De Milo.

Compare the Inkblot Test, where a patient is judged by what they may see in incoherent stains. Contrast The Blank, when someone who should have a face doesn't have one, and Rushmore Refacement, where someone commits an act of graffiti by carving their own face in the side of a mountain. See also Beast with a Human Face. This trope is often a source of Poorly Lit Pareidolia.