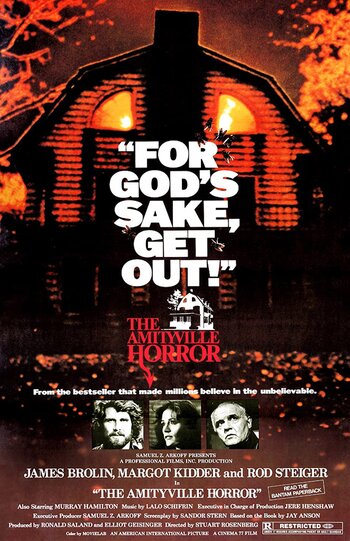 The first film in the Amityville franchise, The Amityville Horror (1979) was directed by Stuart Rosenberg and stars James Brolin, Margot Kidder, and Rod Steiger.

Based on the 1977 novel of the same name by Jay Anson, it chronicles the (supposedly true) events that befell the Lutz family, who moved into 112 Ocean Avenue in Amityville, New York only to move out 28 days later, claiming to have been terrorized by paranormal phenomena there.

In December 1975, recently-married couple George (Brolin) and Kathy Lutz (Kiddder) move into the Amityville house along with Kathy's three children from a prior marriage. The house was available at a bargain price, and for a very good reason: it was the scene of a multiple murder, when the previous owner, Ronald "Butch" DeFeo Jr., shot and killed six members of his family on November 13, 1974. During their stay in the house, the Lutzes — along with local Catholic priest Father Delaney (Steiger) — start to experience various phenomena that tell them that whatever malevolent force drove DeFeo to such violence might still be there...