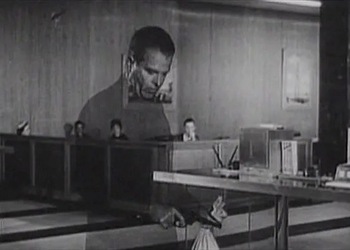 The plot concerns a scientist, Dr. Peter Ulof (Triesault), who—under duress—develops a method for turning men invisible. The particular "guinea pig" for this method is recently liberated career criminal Joey Faust (Kennedy), who is extorted into working for Ulof's boss, disgraced U.S. Army major Paul Brenner (Griffith), who is hoping to create an army for profit. Faust is enlisted to steal "atomic material" to use during the research.

Eventually, Faust discovers that the invisibility process is both unstable and deadly. It falls to the scientist and various others to stop this evil scheme before the world is truly doomed.

The Amazing Transparent Man contains examples of these tropes: