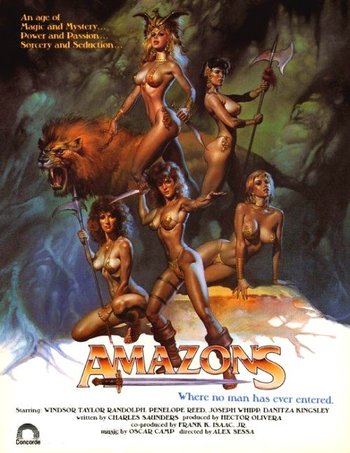 One of the many Heroic Fantasy films produced by Roger Corman and filmed in Argentina to capitalize on the popularity of fantasy films at the time. It is notable for having a better than average story, with villains who have read The Evil Overlord List. This is likely due to the script being written by noted African American Fantasy author Charles Saunders of Imaro fame, adapted from his short-story Agbewe’s Sword, which was published in a 1979 anthology titled Amazons!

The titular Amazons are the elite guard in the lands ruled by The Emerald Queen. When the Evil Sorcerer Kalungo and his Evil Army begin to lay waste to the land, it is determined that one of the Amazons must retrieve The Sword of Azundati - the only weapon capable of slaying Kalungo. The Chosen One is revealed to be Dyala - the second in command of the Amazons. The Amazon General, Tashinge, orders her daughter, Tashi - the finest warrior among the Amazons - to go with Dyala to watch her back.

In truth, Tashinge wants Tashi to kill Dyala once the sword is secured - nominally to settle a score with Dyala's mother but really because she is working with Kalungo to retrieve the one thing that can kill him in exchange for becoming his queen once he conquers the land. Kalungo, however, is smart enough not to trust any woman capable of betraying her own people, and sends his lioness Akam to kill both Dyala and Tashi once they have the sword.