Film / Wizards of the Lost Kingdom 2 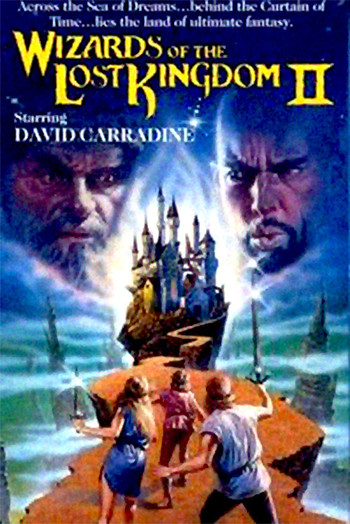 This scene never happens in this movie, either.
"Three years later I'm at a wedding reception for a friend who still works for Roger. And Roger's there. So we're chatting and kidding around, and I said, 'Ah, man, remember that "Wizards of the Lost Kingdom" movie?' And he said, 'Oh, y'know, that did very well in video. We filmed a sequel!'"
— Ed Naha, writer of Wizards of the Lost Kingdom
Advertisement:

One of the many Heroic Fantasy films produced by Roger Corman to capitalize on the popularity of fantasy films in The '80s, Wizards Of The Lost Kingdom 2 is, shockingly enough, a Sequel to Wizards of the Lost Kingdom. Unshockingly, given this -is- a Corman picture, this film is a sequel In Name Only, lacking any common characters or frame of reference to the original film apart from some Stock Footage in the opening credits and the fact that both movies center around Child Mage protagonists.

The basic plot sees Caedmon—a shepherd and reportedly last of the good wizards—sent off in search of Tyor, The Chosen One who will defeat the three evil wizards who have taken control of The Three Great Powers Of Creation. It stars Sid Haig and David Carradine.

Wizards Of The Lost Kingdom 2 was—like its predecessor—apparently created in an effort to craft a more family-friendly film. And just like the original, a goodly portion of the movie featured heavily edited Stock Footage from several of Roger Corman's adult fantasy films—particularly The Warrior and the Sorceress and Barbarian Queen, with a few clips from Amazons and Deathstalker II: Duel of the Titans. The movie also lifts the plot of the original Deathstalker to boot!

Miraculously, this movie had the budget to rehire David Carradine (The titular warrior from The Warrior and the Sorceress) and Lana Clarkson (the titular Barbarian Queen of Barbarian Queen) to film new linking scenes in an effort to tie Stock Footage from their earlier films into the main story. It's debatable how successful they were in the end but at least some effort was made.

In 2017 it was included in the revival of Mystery Science Theater 3000. For tropes pertaining to that episode, see here.