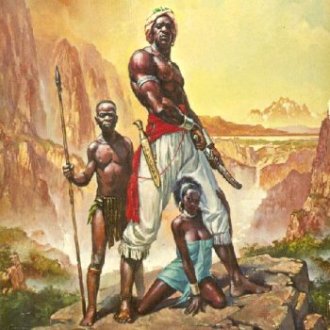 From left to right: Pomphis, Imaro, and Tanisha.
Advertisement:

Saunders grew up reading the adventures of Conan the Barbarian and Tarzan, but was troubled how such stories never had black heroes, even when Africa was involved. So he decided to write his own stories, and created Imaro and Nyumbani, his new hero and setting respectively. Nyumbani is a Fantasy Counterpart Culture of Ancient Africa with people and places corresponding to real ones throughout Africa's history. Imaro, an outsider from the moment of his birth, overcomes endless challenges to his existence ranging from petty Jerkasses who don't like him for not having a father to an Ancient Conspiracy by Eldritch Abominations. Imaro, aside from simply desiring survival, seeks to find the answers about his father and why he encounters so much misfortune. He makes good friends and hated enemies along his trek across Nyumbani.

In order, the series is as follows: