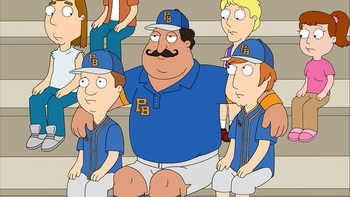 A common stereotype of coaches and school gym teachers is that they have a "special interest" in their students.

Some of the things they may do include staring intently at people while they exercise, getting all touchy-feely with them, making flirtatious comments, trying to peek at them changing/showering, stealing underwear (and sometimes sniffing them), or desperately trying to get into people's pants. Their intentions can range from plain creepy (staring and sexual comments, but not actively trying to hurt people) to downright villainous (e.g., molestation or out-and-out rape). If the coach is well respected (usually because they coach a famous sports team), then they might get away with their actions.

People who are victimized by a creepy coach can be any age, with people who are school-aged being the most common. It won't end well for them if the parents find out, however.

This is Truth in Television, as there have been coaches and gym teachers in real life who have sexually harassed or even sexually assaulted the people they were coaching.

Due to the perception that All Men Are Perverts and that A Man Is Always Eager, the coach is usually male. A female coach who behaves like this is more likely to veer into Double Standard: Rape, Female on Female (unless she falls at the Psycho Lesbian end of Lesbian Jock) or Double Standard Rape: Female on Male (unless she's an Abhorrent Admirer in the case that No Guy Wants an Amazon—and even that is more likely to be played for laughs than if the genders were flipped). Related to Teacher/Student Romance, Sadist Teacher, and Evil Teacher. See Drill Sergeant Nasty for another stereotypical portrayal of coaches (even though it originated with drill sergeants).

This trope is a stereotype, so No Real Life Examples, Please!